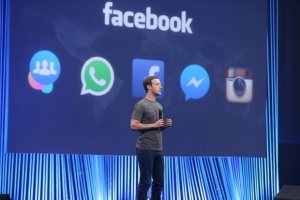 Facebook CEO Mark Zuckerberg opened this year's F8 conference by mentioning the incredible progress the developer community has had since last year, stating that more than 30 million apps and sites have been built using Facebook tools and over 50 billion pieces of content was shared.

As expected, the company has made an array of announcements and we bring you the highlights from the first day.

"Over the last few years, Facebook has evolved in ways it connects to the world – from being merely a single 'blue app' to a family of apps it has become today" Zuckerberg said, showing the family members and their popularity on a screen behind him.

"There are so many ways people want to share and this family will keep growing", said the CEO adding that the move from being a single service to a world-class family of apps has been the largest shift in their strategy so far.

The content people are sharing is also changing, since the technology gives us tools for a more richer and interactive content, as opposed to texts and photos from 5 years ago. Video is considered as one of the most engaging content as there are more than 3 billion videos watched on Facebook in news feed. This is where the virtual reality content comes in, with the new Spherical - 360 degrees video. Users will be able to move around in the video, interact with it and feel they are actually there.

The next announcement tackles better sharing experiences, as users are presented with an elegant system – a sheet enabling them to share their content only to groups or tagged friends, instead of their whole news feed.

After adding stickers, location and voice calling, which already accounts for over 10% of all mobile VoIP calls and rolling out payments inside the Messenger app last week, the company announced it's next step in Messenger strategy – Messenger Platform. No longer just a part of Facebook, but a stand alone platform, it enables developers to build apps and give users more power to share their content and make the world more open and connected.

David Marcus, VP of Messaging Products announced that in a few weeks companies will be able to communicate with customers and re-introduce personal back to shopping online and on mobile. Via this new feature users will be able to receive real-time order confirmation, receipts, tracking information and more, all of which will reinvent the way people in business communicate and make the communication more natural.

Parse CEO Ilya Sukhar announced that they would offer a set of SDKs for its Parse mobile app development platform enabling developers to build connected devices. By doing this, Facebook will be competing to provide a cloud backend for the Internet-of-things. Moreover, Parse announced support for the React JavaScript library, which enables React developers to access and store data from Parse.

As of today Facebook enables users to embed their Facebook videos on other sites by taking the embedded video URL and dropping it on your website. This greatly increases the potential reach of content and is probably another (clever) move from the media giant into new advertising options.

To help better understand how and why people use applications, Facebook released Analytics for Apps – a new tool for marketers to see how their apps are performing conversion and engagement – wise.

Last of yesterdays announcements – recently acquired video advertising firm Live Rail will help publishers and developers monetize video content on the web and mobile. Live Rail will now support display and native ads for mobile apps, not just desktop sites. Advertisers will see increased ROI as the right ads will be delivered to the right audience and users will view more relevant ads.

Catch up with us tomorrow, as we will be updating the list with recap of Day 2!